For twenty five years now, in over two thousand performances from the Home Grown Hub of America to Leningrad University in Russia, McAvoy Layne has been preeminent in preserving the wit & wisdom of Mark Twain. Here, he recounts a first-person account of his visit to Lake Tahoe.

At last we disembarked in the Silver Land, Nevada, parched and coated with alkali dust.  This was August of 1861, and back then, Carson City was the most uninhabitable place on earth.  Nothing grew there; even the birds when they flew over, carried their own provisions.

We climbed into the foothills and looked back on Carson City nestled in that flat sandy desert, and surrounded by such prodigious mountains that they seemed to expand your soul, until you felt yourself spreading into a colossus, and in that instant, you were seized with a burning desire to stretch forth your hand, put Carson in your pocket, and walk off with it.

In exploring the sink, we traveled along the Carson River a ways.  When one is accustomed to the monster mile-wide Mississippi, he grows accustomed to associating the word, “river,” with a certain degree of watery grandeur.  So when one stands on the shores of the Carson, he’s disappointed.  One of the most vigorous forms of exercise one can contrive is to run and jump across the Carson ‘till he is over-heated, then get down and drink it dry.  It’s a moist ditch, is what it is.  If it were my river, I wouldn’t leave it out of doors at night. 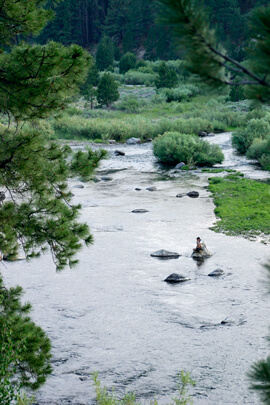 I covered the legislature for the Territorial Enterprise, and in all these years, nothing has changed. Never have I seen a body of men with tongues so handy and information so uncertain.  They could talk for a week without ever getting rid of an idea.  If any one of them had been on hand when the creator was at the point of sayin’, “Let there be light,” we never would have got it.   No, the Nevada legislature meets every two years for sixty days, when they ought rightly meet every sixty years for two days.  Oh, they carried whiskey into the committee rooms in demijohns and carried it out in demagogues.  When the legislature is in session, nobody is safe.

McAvoy Layne is the ghost of Samuel Clemens in A&E’s biography of Mark Twain, and in the Discovery Channel’s Cronkite Award winning documentary, Adventures of Huckleberry Finn.  He is a winner of the Nevada award for excellence in school and library service, and author of a soon to be published memoir, Becoming Mark Twain.

McAvoy will be reopening the Mark Twain Cultural Center & Toccata-Guttman Music Hall on October 25 in time to kick-off the celebration of Nevada’s Sesquicentennial. For “Roughing It” reservations call 775-833-1835.  (Mark Twain’s birth year in case you forget.)  Bring your picnic basket and beverage of choice.  Tickets are $20 cash or check.