I woke up with an idea a couple years ago. Instead of forgetting about it over breakfast, I learned how to bring it to life.

My idea was to create premium vodka inspired by the spirit of Lake Tahoe, and the result is Tahoe Blue Vodka.

I searched online to identify the steps I needed to take to produce it and bring it to market.  And more than anything, I wanted to see if I could do it.

With the help of my wife and some friends we recruited to help share the work, we identified sources for all the dry elements we needed to get started:  bottles, corks, tamper proof seals, boxes, and a screen printer. Then we secured a California liquor distributor’s license. 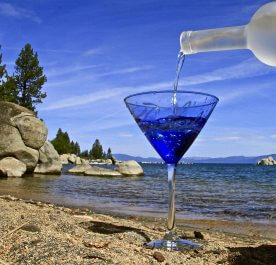 The next step was to find a distiller to hire the manufacturing out to.  We looked high and low before stumbling upon a family run distillery in Mountain View, California that’s notorious for making award-winning spirits. We worked together to create a recipe with the main focus of eliminating the classic vodka ‘bite’ or aftertaste.  We opted to take a blended approach, where we distill three vodkas separately (one from grape, one from grain, and one from sugarcane). Then we blended them together and distilled them two more times. This is where the smooth flavor profile comes from. The grain in this case is corn, so it’s completely wheat and gluten free.

It seems to me there’s parity between the clear, pristine, and pure waters of the lake and quality vodka.  We wanted the bottle design to be symbolic of Lake Tahoe and feature an image of a snow-capped Mt. Tallac on it. We wanted to have packaging so pretty everyone would want to buy it. We also wanted to donate a portion of proceeds to the nonprofits that help preserve the product’s namesake – the blue Lake Tahoe.

Tahoe Blue Vodka hit store shelves on March 1, 2012 and it’s been well received. To date, we’ve entered it in four tasting competitions, and we’ve brought home medals each time. Recently, Tahoe Blue Vodka took home top honors in the unflavored vodka contest at the Ultimate Spirits Challenge. Our belief that we produced premium vodka was validated. It’s currently available in California, Nevada and Oregon, and we’re getting calls and emails from all over the country asking about availability.

Reality really set in when I went in to a local grocery store to buy a bottle to take to a dinner party. It was surreal putting it in the cart and checking out with it more than a year and after its conception.

Now we’re in the liquor industry, but in a small business kind of way. We are in an industry dominated by giants who are not terribly hospitable to new entrants.  Our brand is owned by a small business and manufactured by another in micro-batches right here in Northern California. Tahoe Blue Vodka is rapidly gaining market share and we have plans to expand our distribution, possibly adding flavors or other products.

For now, I can bask in the fact that we launched our own brand of liquor against the odds and it’s selling.  And the more we sell, the more we can help preserve the environment.